WISSA Races and Snowkite Bliss at the End of the Road. 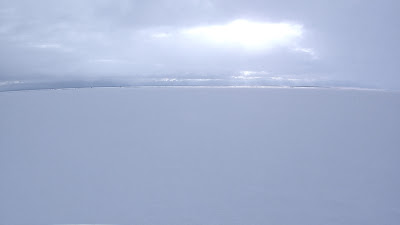 Okay so obviously I've been slackin off on this blog thing to a level of slack that has rarely been seen before.  I started the WISSA entry almost 2 years ago but managed to misplace it and well when the summer of 2012 hit and we started trying to put together a little company called Hardwater Kiting and Eastside Bike Guides (more on that later) and things like the blog just got pushed aside.  But recently I found the WISSA blog entry, and some images ANNNNNNND snowkite season is upon us so I'm getting pumped to get back into the swing of things.  It's been a strange year or so since WISSA and I have a lot to write about but I want to get everything up to speed starting with this delayed entry.  Bare in mind I wrote it a while ago so any present tense is from a few months back. The WISSA trip..... Friday I woke up at 04:00 and got myself out the door at 04:30m, jumped in the van and headed North to the Canadian border.   Before I knew it, 9 hours later I was in a
Post a Comment
Read more

Slim Pickin's on the Planet of the Kite Apes. 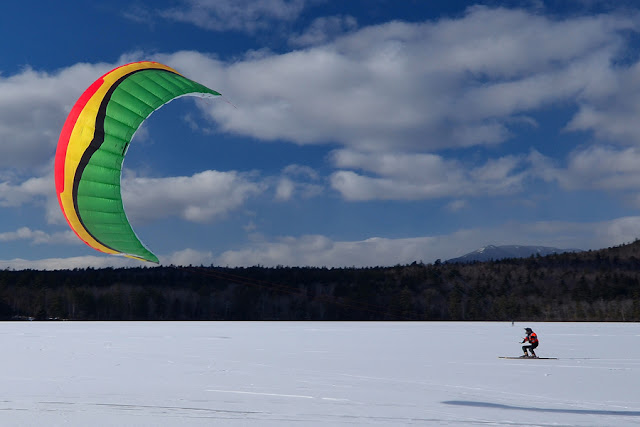 ﻿﻿ Mike Elliott aka "Color in Action" ﻿﻿ Anyone who lives in the northern hemisphere in North America is well aware that this winter has been the lamest winter on record.  Many of us last year said on more than one occasion that if our first snowkite season was like last season we probably wouldn't have stuck to it. Little did we know how good we had it. At least this season hasn't been a total loss and the frustrations of last season have definately tempered us for tolerating this "winter's" dissapointments.  You can't fight the weather and if your favorite activity is dependent on the weather, then too bad for you when the weather sucks. Knuckle dragger However inspite of the late season and the intitial lack of riding we've been "making up ground" and getting some really good sessions in while we're at it.  Lake Chocorua has been our primary location so far this season and Umby as our secondary.
1 comment
Read more

Happy New year everyone!!! Molly and the 24m Phantom 2. New Years Chocorua Well, I'm happy to say that our kite season here in Northern New England kicked off before the new year did.  It's still a little "touch and go" with the wide temperature swings but it is ON!  Monday of last week was the first day on Umbagog and the first on ice for me this season. It's never a good feeling to be out on the ice for the first time, wearing a PFD and hoping to hell you don't go swimming.  Especially in light winds. But it was a good feeling ot be out. A few days later we got some rain followed by a cold front.  Cleared out most of the snow and set up the ice for some great high speed cruising. We got a day where the winds were nukin' so I decided to take a spin down and see if Chocorua was and good yet.  The wind must have been a lot more North than NW because when I got to Chocorua it was dead calm.  Wind was blowing everywhere BUT Chocorua.  I jumped back
3 comments
Read more 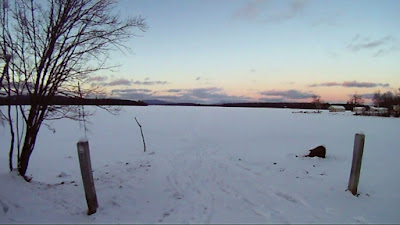 It's about time. Last snowkite season was the worst I'd seen in the last ten years that I've been involved in this nonsense.  It was late getting here, the surface conditions were a mess most of the time and the wind, well there really wasn't any.  Kitestorm didn't have any wind, Mille Lacs didn't have any wind, the wind we had locally was almost always southerly which kinda sucks for a lot of our local spots.  It wasn't like previous years when my "go to" kite was a 13m Venom.  No last season pretty well sucked.  The suckiest suck that ever sucked. And I would take it over this season in a heartbeat. The ice situation this year has been non-existent.  We get a cold stretch and then a skim on the smaller lakes then we get hit by a warm stretch and it gets wiped out.  This keeps happening and I won't lie it's starting to feel like a punch in the privates everytime it happens.  My only solice is that we aren't suffering alone and
1 comment
Read more

Patience is a Virtue. 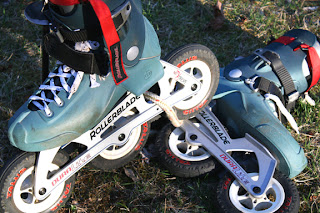 Well the season isn't carrying the momentum we hoped for after getting a jump start back in freakin November.  People are running around spouting "global warming" assuming these last two unusually warm months are because the Earth is getting warmer.  But we've been noticing that the spring months have been colder the last few seasons so it appears to me to be a shift in the seasonal cycles. At least that's what I'm going to keep telling myself.  Otherwise I might become suicidal at the thought that my snowkite seasons might be getting shorter. I've been playing with various Arcs that I haven't had much time on and cruising on my Coyotes (off road skates) as a substitute for skis and snow.  The Coyotes are actually a hell of a lot of fun but I use them rarely because they dig in a lot if the ground is a little soft and I don't want to tear up anyone's fields. But when the surface is firm they're a hoot. Mo and Jo Molly and
6 comments
Read more 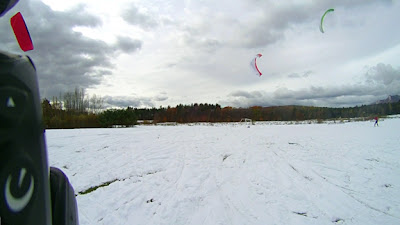 Here in New England we occasionally get hit with a certain type of storm refered to in this part of the world as a "Nor' Easter".   To put it simply it's a hurricane like storm system that  usually follows the eastern coastline heading North East and really pumps out snow and wind. With it's rotation winds come out of the North East and can be REALLY punchy, even for around here.  They can make a hell of a mess but at the same time they can dump a ton of snow in a short period of time and with the wind they produce you can go from having no snow, no wind, and nowhere to ride to having plenty of snow, crazy wind and riding in the fields. That's what we got on October 29th. I heard the weather report a few days prior but didn't give it much thought.  They said there would be a Nor' Easter and that some snow was expected but it's been unseasonably warm this fall, the trees still hadn't lost many leaves (in fact many were still green) and i
2 comments
Read more
More posts

North Conway, New Hampshire, United States
My name is Chris Krug and I snowkite. This blog follows the ups and downs of my experiences as a snowkite instructor and former sponsored rider for Peter Lynn Kiteboarding. My discipline (or lack thereof) is speed. I live and ride in New England and my company; “Hardwater Kiting" is based in North Conway New Hampshire. We offer professional snowkite instruction and authorized sales of Ozone, Hq and Flysurfer brand kites. www.hardwaterkiter.com I love the snowkiting for the freedom that it affords and for the personal connections and opportunities that it has provided.